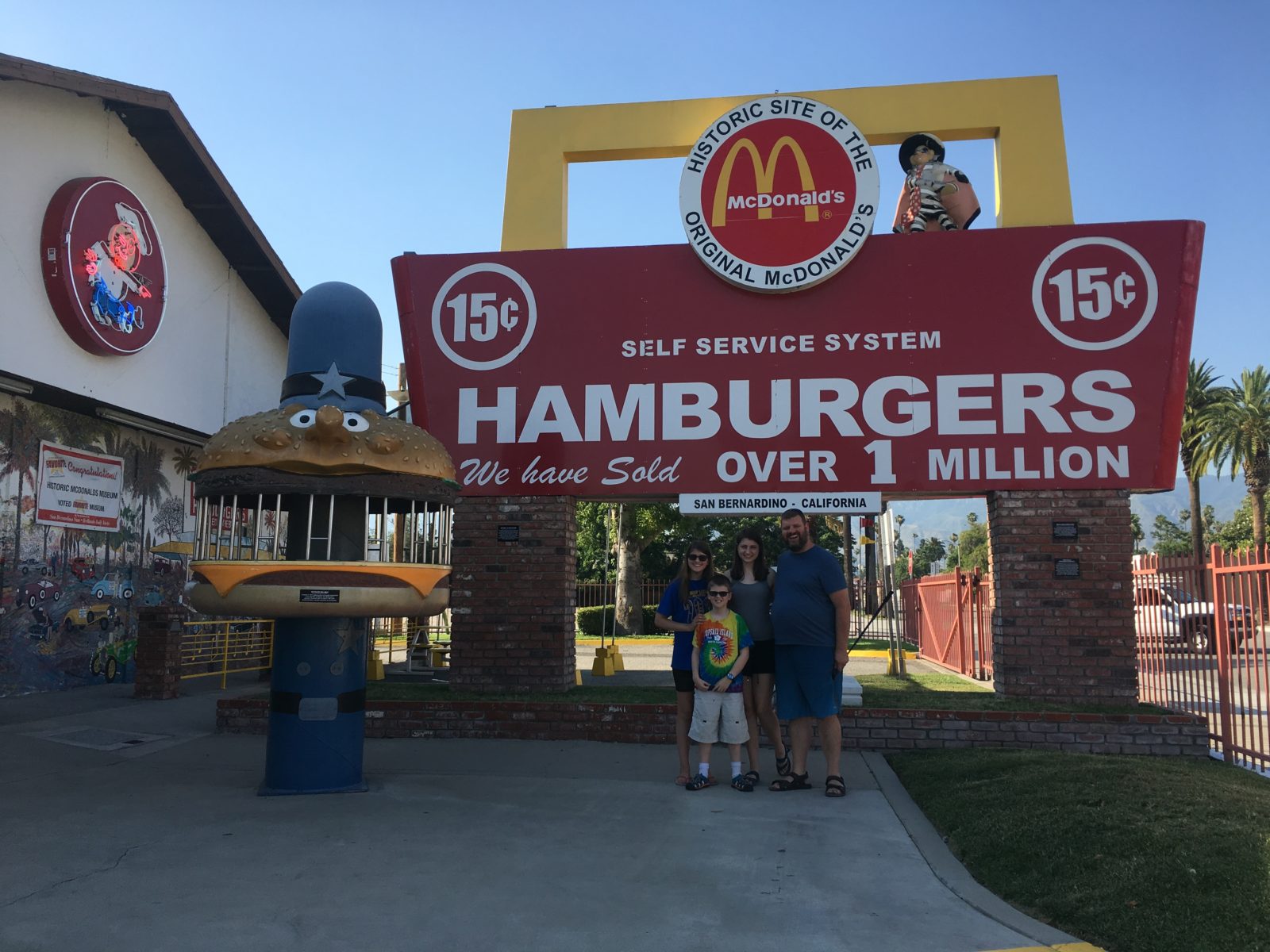 My family and I recently took a vacation to the western parts of the United States. We traveled great distances in our thirteen-year-old van as we criss-crossed many states and many famous and well-known tourist destinations. But as we drove I found myself drawn to some more off-the-beaten-path locations where something extraordinary had started. My curiosity summoned me to explore some of these sites.  As we entered San Bernardino , California I remember thinking, isn't this where McDonald's started?  I wonder what it looks like now?  Will it still look like it did the movie Founder?  Are the streets lined with golden arches?  Man, I could go for a burger and fries...

I Think I'll Just Stay in the Car

We put in the location of the first ever McDonald's restaurant in Waze.  As we got there, we were greeted by the familiar site of golden arches.  But also something else caught my eye.  Why are those metal bars surrounding the property?   Is that how it was originally?  As we parked the car and looked around, we could see signs of a distressed neighborhood.  Broken windows on houses, trash on the streets, and signs of poverty and despair.  I felt like Marty McFly in Back To the Future II where Biff had created that alternative Hill Valley.

My wife noticed the same things I had and after parking in a nearby street said 'You guys go ahead, I will just stay here in the car."   The kids and I headed over and took some pictures outside the site.  We quickly learned that it was no longer a functioning McDonald's, but an unofficial museum not endorsed by the giant McDonald's corporation. After talking to the manager of the museum, he confirmed that those bars are not just for show but to protect the site from "a shi**y neighborhood".

All of this aside, it was still special to set foot on the location where an extraordinary movement had started.  How the world consumes food was forever changed.   It all started right here where I was standing.  There may have been something magical about the location over seventy years ago when the McDonald's brothers started there. But I doubt it. It was likely an ordinary neighborhood where something miraculous began.

Wouldn't It Be Nice?

Our travels brought us to Hawthorne, California where the famous brothers and members of the Beach Boys were raised.  Few bands have had the influence to modern music as the Beach Boys.  Their unique harmonies and melodies defined a generation. Brian Wilson's insistence on producing his own music was unheard of at the time.  At this location over fifty-eight years ago, the Wilson brothers alongside a cousin and friend recorded their first demo on this very spot called Surfin'.  Music would never be the same.  And it all started in this simple suburban neighborhood in the 60s.  The actual house was demolished years ago to make way for a highway but there is a monument where it once stood.

Ever since seeing the first Toy Story movie back in 1995 I have been a huge Pixar fan.  While visiting the San Francisco area, I wanted to see the site where they crank out box office smashes and invent some of the most beloved characters like Woody and Buzz.  I knew I wasn't going to be able to see much, but I still wanted to witness the campus from afar.

I ended up getting a really good look at the neighborhood as I quickly realized I locked my keys in the car (yes, our van is still old enough where that is possible).  I waited for AAA to come unlock my car so I could drive back.  Instead of gold-lined streets, the area was ordinary and industrial.  There were homeless people nearby.  I sat on a folding chair that was a make-shift lobby for the company across the street.  This area is really where some of the biggest hits in Hollywood were created?

Did I Really Have to Travel Cross Country to Learn This?

I live in the Dayton, Ohio region. It feels like any other US suburban city with a Wal-mart, Panera, banks and shopping malls. But the same Montgomery county I live in is where powered flight was invented.  Just fifteen minutes away.  Right here.  Two brothers that worked on bicycles would end up developing airplanes on the side and creating a movement bigger than they ever could have imagined.

Bloom Where You are Planted

Many of us wait for the perfect, ideal environment or circumstances to make a difference and start a movement. But this doesn't have to be the case. We can begin right now where we are. Then years later someone will visit and observe an ordinary place where something extraordinary began.