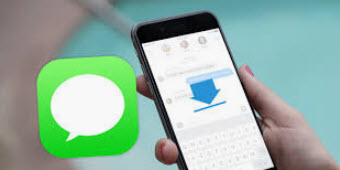 or emotion.  Was it a positive or negative statement?  Would it really work?  Do I send good vibes to others or am I a negative Nelly?  Who is the most negative person that texts me? Is my wife always so positive?

Humans can interpret the meaning behind what someone else is saying.  Is this person expressing anger?  Are they sad?   As digital communication has increased, engineers have tried to teach computers to do the same.  Business leaders have explored this technology to mine what people are saying about them online. Are they delighted?  Or disappointed?   Some common uses of sentiment analysis for business include:

Here are some examples I pulled from my dataset of texts classified as either positive, neutral, or negative. 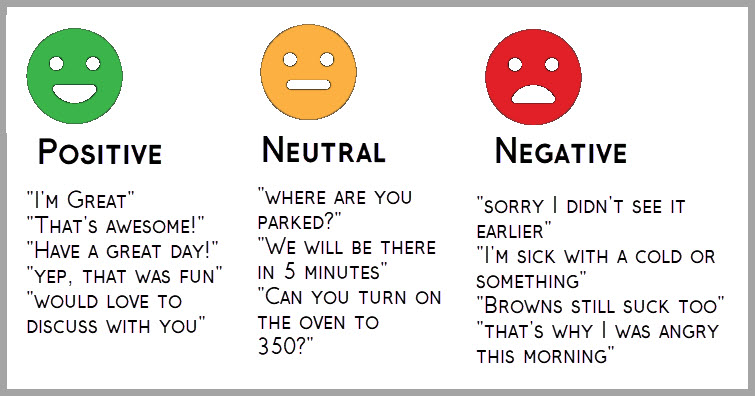 I decided to leverage Micosoft's cloud service for my text message analysis.  It was simple to get started with a few clicks in the Azure platform. The rest was more challenging and involved writing software to call the service and capture the results.  The nerds in your company or a consultant can handle it as it is standard API calls familar to developers.  The key takeaway is a technical resources can access the service within minutes and begin getting results.  There are many other providers of sentiement analysis such as Google and Amazon that provide similar services.

I Receive More Negative Texts Than I Send

See - I am a positive person!  The proof is right here below! I send more positive messages than negative.

My Friends Are a Mixed Bag - Family is More Neutral

I guess there isn't a lot of bland conversations between my friends - it is either positive or negative, not nearly as much gray - based on this visualiation in this case literally.  On the flip side, my interactions with my immediete family are much more neutral (75% sent and 71% received).  This makes sense as there is a lot more transactional conversations with family such as "On my way" and "leaving" and "yes" for example. 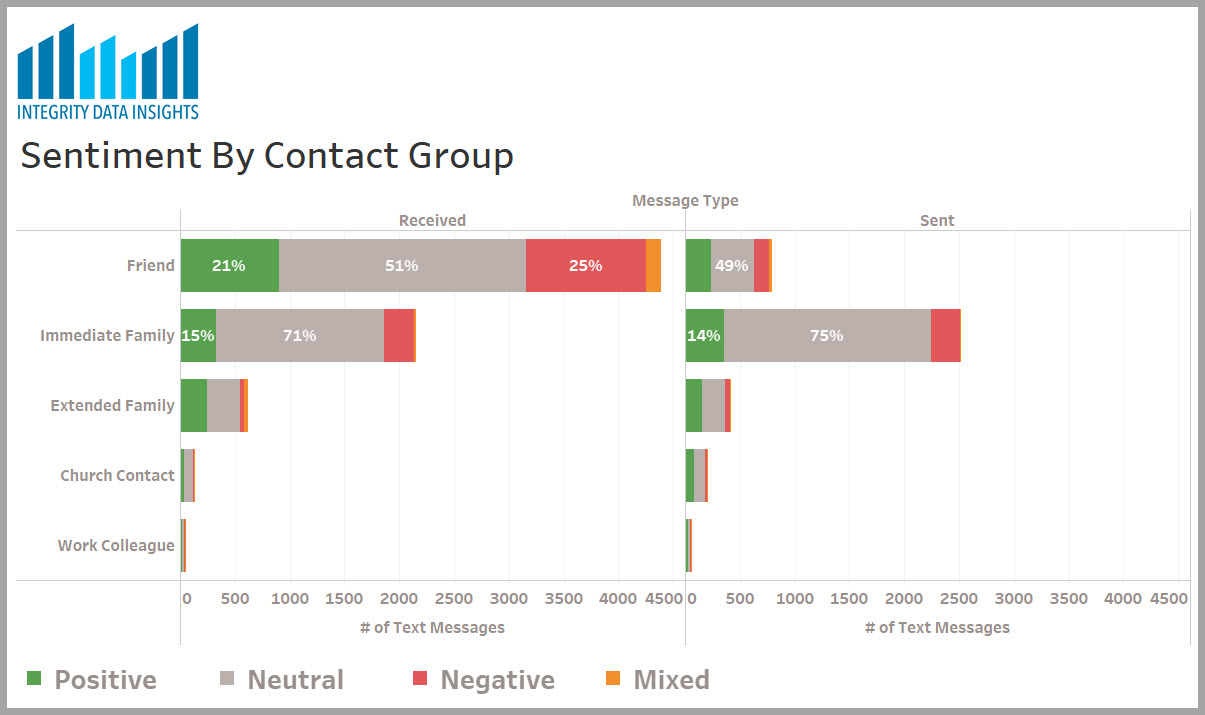 An interesting trend I found was a significant increase in negative sentiment following COVID-19 discusssions (March 2020 and later) increasing from 13% to 19% of messages received. 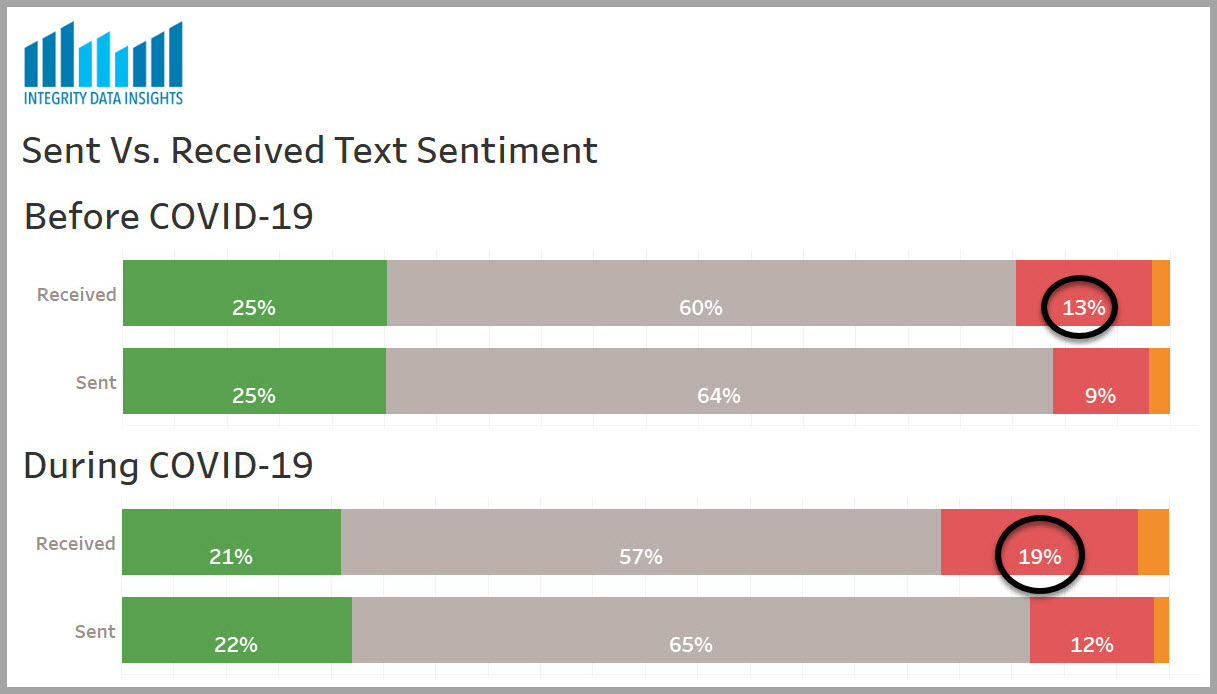 You can clearly see the spike by laying out the results by month as seen below.  August 2019 I spread the most cheer! 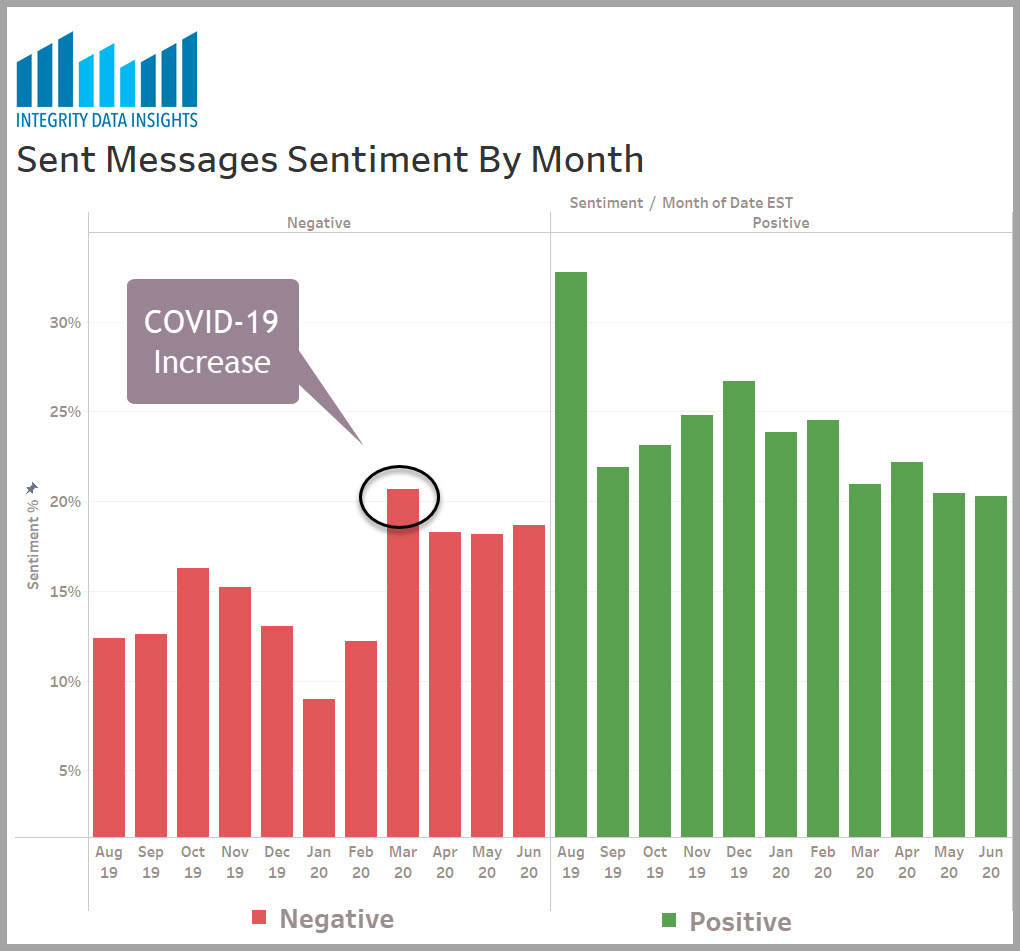 My father-in-law and friends didn't surprise me too much to see at the top of the negative texts I received.  But the kid's school?  I dug a little deeper.  It was likely keying off words like "cancel" and "delay" as most of the texts from the school were around school closings and delays. 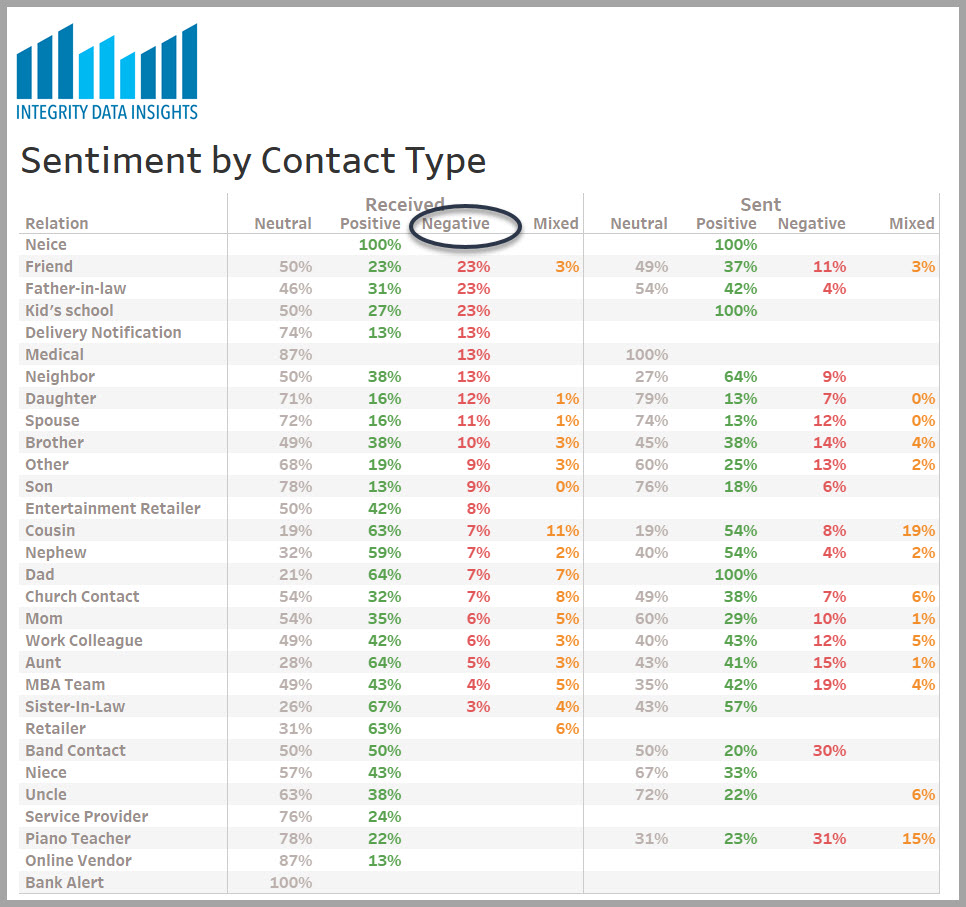 Many times I only hear from my extended family on events such as a birthday, anniversary, etc.  So it makes sense that when they do reach out, they carry a positive message to me. 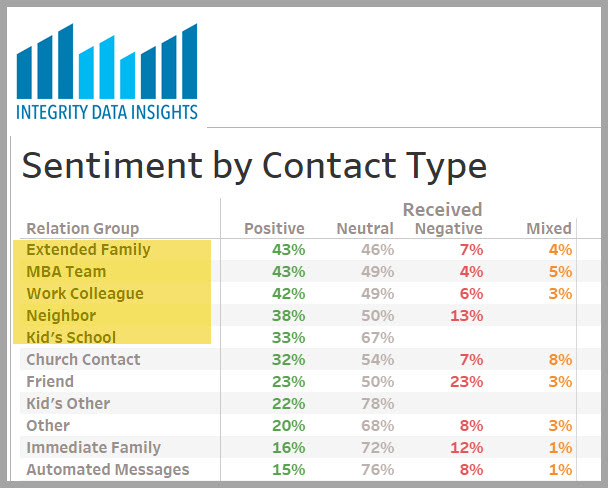 The messages between my wife and I were pretty well matched - and most were neutral sentiment.  She has a slight edge in messages sent with positive sentiment. 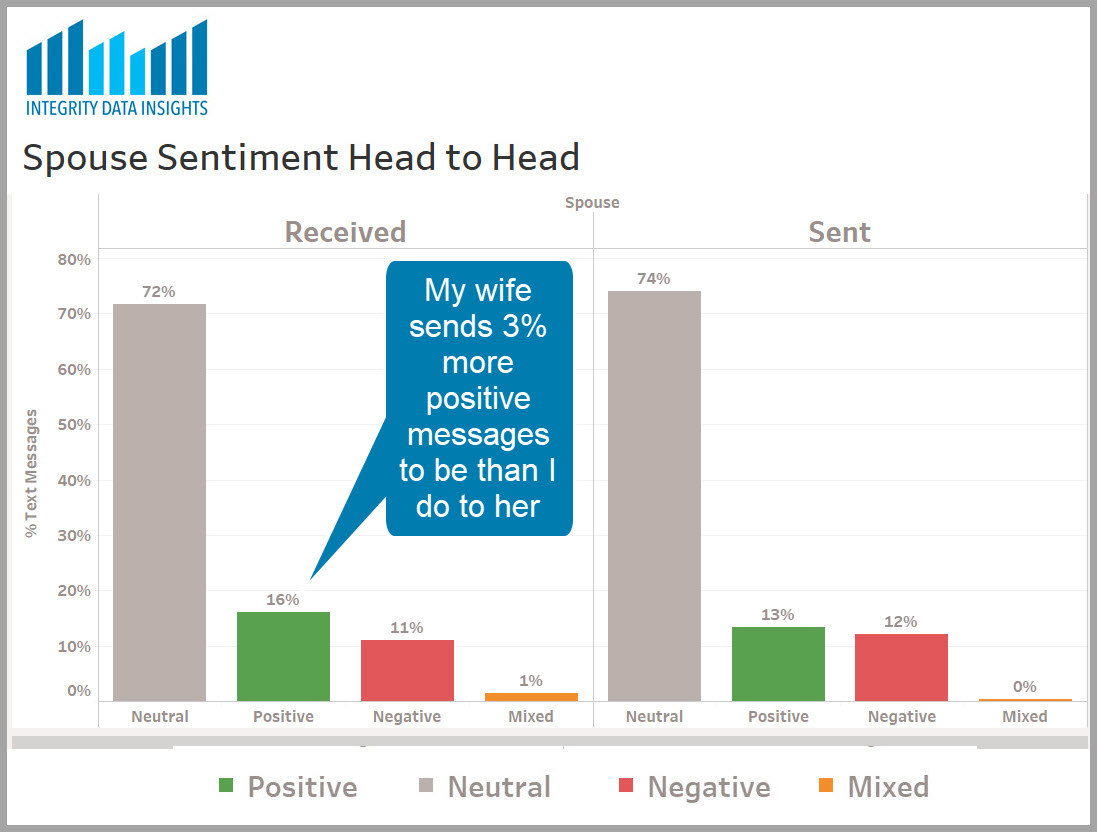 It can be hard enough for a human to detect someone's intentions.  So no wonder the machine is going to get it wrong at times.  Each sentiment comes with a score for how confident it is in the sentiment it determine.  The lower the score, the more questionable the results.  I had to make some adustments based on the output. The key is to review the results and adust your output accordingly.  The service returns a score for positive, neutral and negative sentiment.  This allows the user to adjust and possibly add cut off scores or other logic to handle mixed sentiment, like the example shown below.   This article gives good tips on the limitations. As always, the services will continue to improve with added investments from cloud providers.

Should You Get Sentimental?

Sentiment analysis is a powerful technology that can be a game changer for getting closer to your customers and being in tune with what others are saying about you.  You can now measure this critical component with hard numbers that previously was very subjective. With cloud-based providers (Azure, Google, AWS) , your developers can append this data to your company data at minimal cost. I would recommend running a small sample of your data points through before investing in software development to run a large set of data through. Kick the tires and see if it adds value to your business.

If you are looking to track marketing sentiment and more common use cases, there are a host of vendors that already offer this service including Salesforce.  Explore these first to tap into your social media channels without having to build something custom. 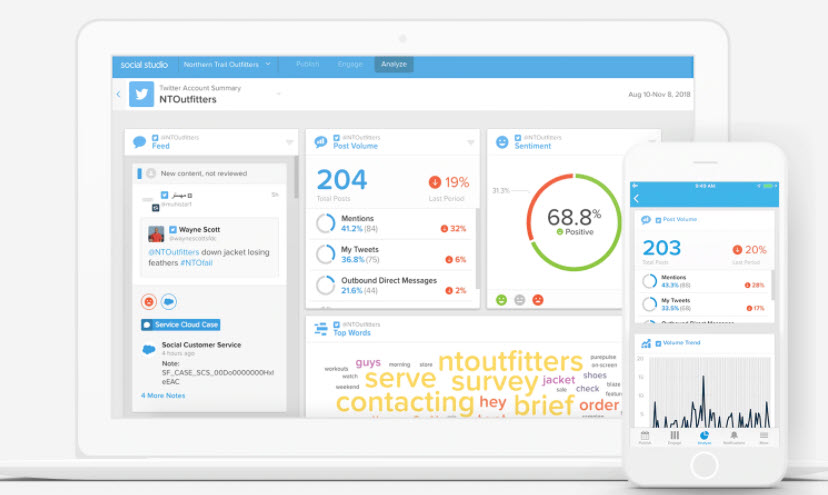 Try it Out Yourself - My Sentiment Analysis Dashboard